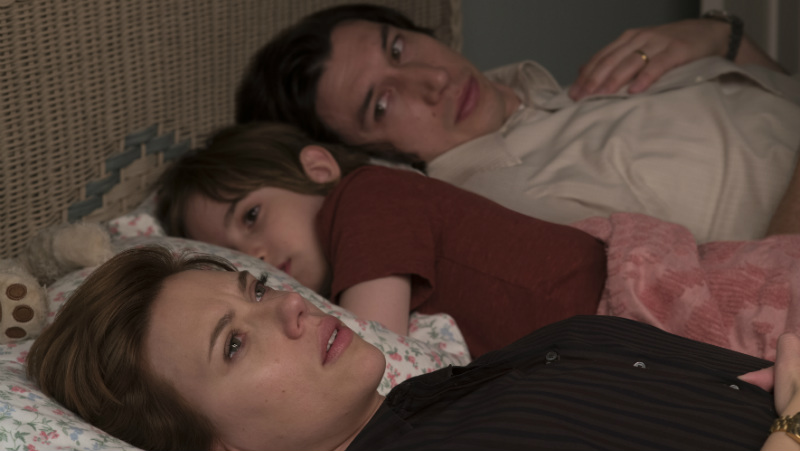 In a career full of remarkable highpoints (The Squid and the Whale, Frances Ha, The Meyerowitz Stories…), here is another dizzying high from Noah Baumbach. It’s also his most personal yet.

Nicole (Scarlett Johansson) is an actor. Charlie (Adam Driver) is a director. Together, they run a New York-based theatre company. They’re also married and have a son. But Nicole is a West Coaster who craves a different pace and a healthier life for their family. Charlie can’t bear California for too long. Accepting a temporary separation while Nicole takes a film job in LA, the dissimilarities in their desires become a chasm.

It’s an economical plot, the gradual unravelling of a marriage, but the great pleasure – and agony – lies in the details. Baumbach is a master of understanding what makes people tick and of finding the bitter hilarity in even the most desolate emotional scenes, such as Charlie steadily falling apart under the unforgiving eye of a family custody worker observing him with his son. Johansson and Driver are exceptional, as are Laura Dern and Ray Liotta, playing spiky and hilariously well-observed West Coast divorce lawyers. Baumbach gives them all so many great moments to shine (and they do!) as he shoots on gorgeous 35mm with a 1.66 aspect ratio that foregrounds performance, often with startling long takes. Alongside the likes of Shoot the Moon and Kramer vs Kramer, Marriage Story is vintage cinema about breaking up, while trying to keep it together.

Please note: there will be no ads before the screenings of Marriage Story and screenings will start at the advertised time.

Sorry We Missed You

Ken Loach returns to the milieu of 2016’s I, Daniel Blake with the fierce, vital Sorry We Missed You, supported by his long-time screenwriter Paul Laverty and producer Rebecca O’Brien.