James Hall, a LUMI Programmer, gives his thoughts on Rocks.

Rocks tells a story of friendship, and how it has the power to enrich our lives despite the harsh realities of the world we live in; something that strikes a particularly poignant chord after months of isolated Zoom calls. The film primarily follows schoolgirl Shola, nicknamed Rocks, as she attempts to look after herself and her young brother after their mother leaves them without warning. 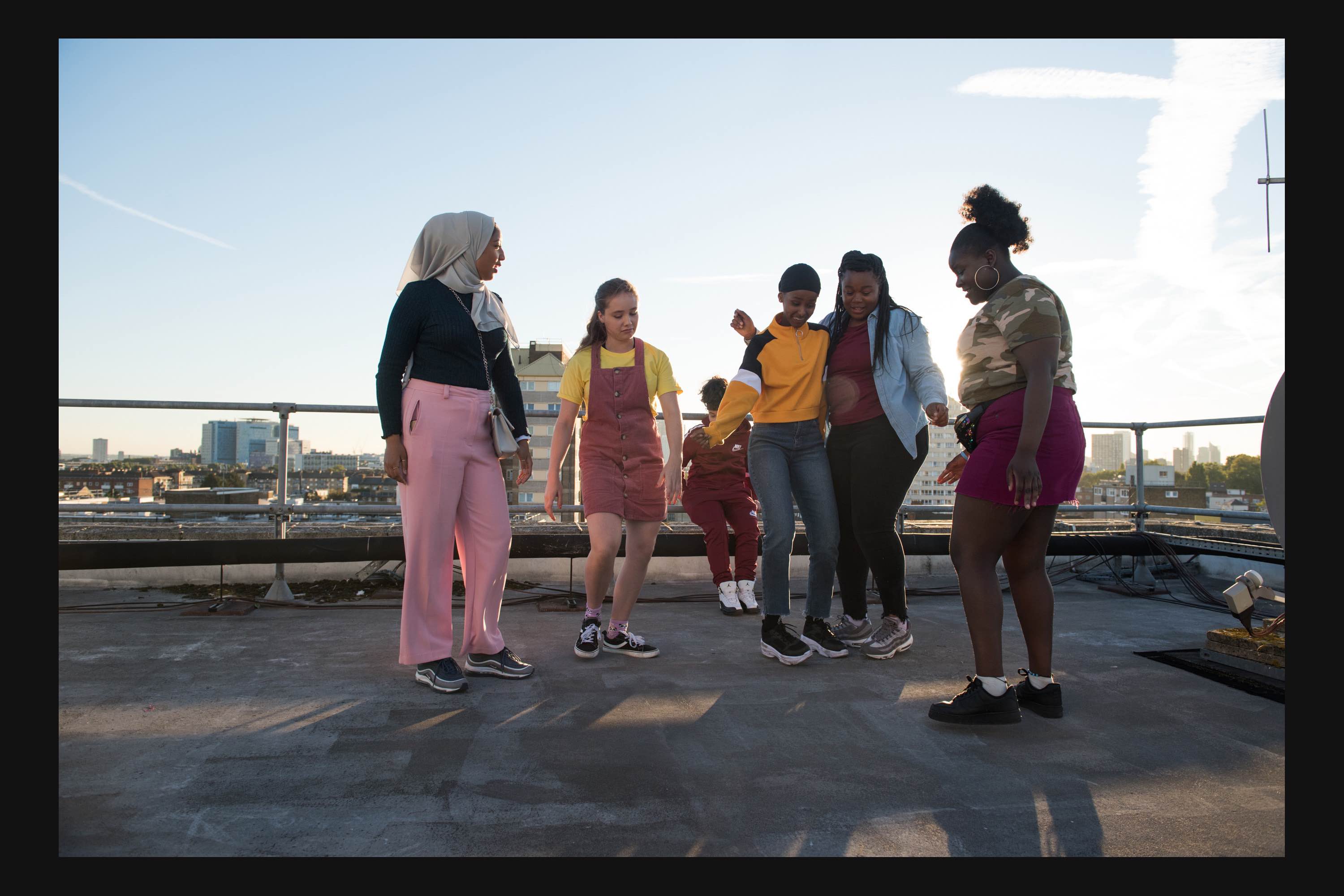 The film falls into a tradition of hard-hitting British social-realist films, following characters forced into difficult situations as a result of the society they inhabit. However, Rocks is far from the drab and downbeat films typically associated with that dusty tradition. The group of friends are at the core of Rocks, and they imbue the film with a genuine sense of personality and vibrancy. The unorthodox filmmaking process helped to create this atmosphere. The story was written by Theresa Ikoko, a young British Nigerian playwright who previously achieved acclaim for her play Girls. She was joined on the script by Claire Wilson, and along with Gavron, they collaborated with the young cast through a series of workshops to shape the story of the film. At the risk of sounding cliché, this extensive story process paired with on-set improvisation lends the film a naturalistic and documentary-like tone. The audience is merely catching a glimpse at this story as it unfolds. This refreshing approach also creates a more fleshed out world, as none of the characters feel like stereotypical bit-parts dished out in the pursuit of faux diversity without actually committing to it, as many mainstream films tend to do. These are real people who are real friends with real lives, and this jumps off the screen, drawing the audience in and creating an electric but intimate atmosphere. 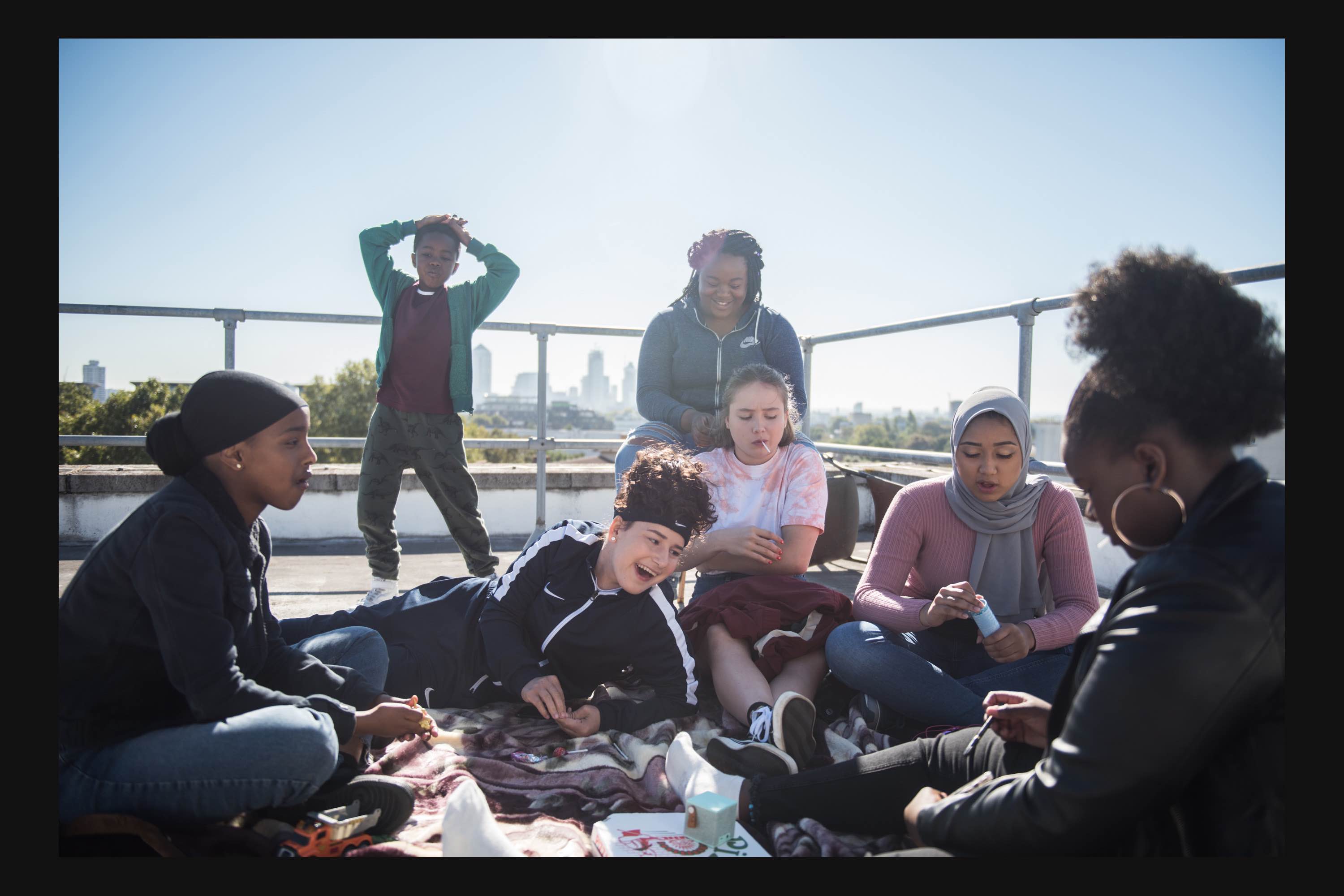 Gavron’s direction builds upon and highlights these core relationships. In more vulnerable moments, her use of handheld camerawork gently probes the scene without feeling obnoxious or noticeable. However when the girls are together, the film cuts to mobile phone footage, showing the girls playing with filters and posting on their stories. Whilst other films have experimented with splicing in phone footage, or having texts displayed on screen, none feels as natural and cohesive as in Rocks, as their phones are crucial to how they process the world around them. Instead of treating social media and mobile phones as a novelty that ‘corrupts the youth,’ the film shows that these devices enrich their lives, helping them to build connections and interpersonal relationships. One plot thread involves Shola’s dream of becoming a make-up artist, something that is brought up by a new friend after seeing her Instagram page. As a result, Rocks never feels pandering to its audience, but genuinely charming and uplifting.

Rocks is a film that comes along rarely, one which shows the issues faced by those less fortunate in society, yet remains uplifting and joyous. A quote from Ikoko about her upbringing encapsulates the film entirely: “Sometimes I see things about places that I know and it doesn’t feel true. They miss out the joy, the excitement, the hope, and all of those things. The communities that I grew up in, we are completely rich in joy. Poverty isn’t all about suffering and darkness, there is a light to it.”