For this week's #WeAreQFT we hear from our QUB colleague Rhys Huws about the film his daughter made him love and which actor has appropriately sad eyes to play him in the film of his life. 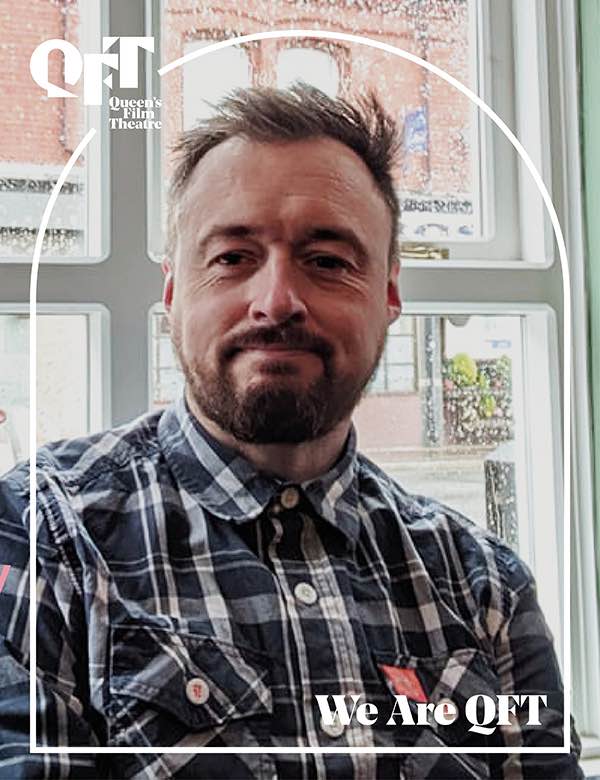 Withnail and I (with wine, obvs)
Pan’s Labyrinth
The Wicker Man (not the Nicolas Cage version)
Moon
Guardians of the Galaxy

My local cinema. I love the fact I live in close proximity to this amazing place!

E.T. at the Commodore Cinema in Aberystwyth; I thought the alien was terrifying at the time. At least it inspired one of my favourite Father Ted lines: “So, there he is, risen from the dead, like that fella E.T.”.

Iron Man 2, it’s my youngest daughter’s favourite film of all time. I know it’s not the greatest in the Marvel catalogue but I like it for her unapologetic love for it!

The World’s End, what other film soundtracks include songs by Suede, Blur, Stone Roses, Primal Scream and Pulp? It’s like a mixtape of all the songs we listened to in our 6th form common room.

Barry Judd from High Fidelity, he reminds me of so many of my work buddies when I worked at a record store years ago.

What is the best thing about going to the cinema? (as opposed to watching a film at home?)

The fact that my wife has to watch a film without continuously glimpsing at her phone!

Do you have a special place in the cinema where you always sit? If so, where is it?

Somewhere towards the middle near the middle aisle, easy toilet access with minimum disturbance is essential. Got to abide with the Wittertainment Code of Conduct.

Withnail and I, I would ditch the live version of Procol Harum’s Whiter Shade of Pale at the beginning. Apart from that the film’s perfect.

The 2005 version of The Hitchhiker’s Guide to The Galaxy. I wasn’t never a fan of the source material, I watched it recently and thought it could do with someone like Taika Waititi at the helm and David Mitchell as Arthur Dent.

What film would you love to see at QFT when it reopens? (can be upcoming or a classic)

Backbeat! A forgotten classic that’s actually quite hard to come by nowadays. Not only does the film contain fantastic performances and quotable lines, the soundtrack features Beatles covers from a band of artists including Thurston Moore, Dave Grohl, Mike Mills and Henry Rollins. My housemates and I watched my VHS copy on repeat at university.

According to my closest friends I have the “sad eyes” of John Hurt; so I guess John Hurt from The Elephant Man.